I'm still here. It's just been a crazy busy month and next month will be more of the same.

I tell ya, Kohls wore me out this month. I always look forward to their BF sale, which actually starts on November 1st. I shopped the 1st, Veteran's Day and again on the 19th. I'm plumb worn out, but had lots of fun. Other than drugstores and an occasional Meijer trip (if they have gift items I need), I don't set foot in any stores. In fact, by the time BF rolled around, I was done shopping. Other than the discounted Target gcs this coming weekend, my Christmas shopping is done. So what did I get? 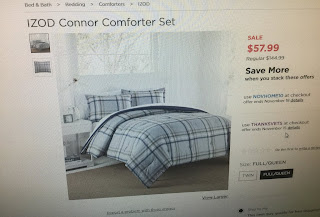 I always stock up on athletic shoes for us during this sale. DS always needs new shoes. I wear my shoes until they break. So I keep some shoes stockpiled for when we need it. My old pair actually got some holes in them just before BF.

The towels is an annual purchase too. Nothing wrong with our old towels, but I like having new fuzzy towels. DH uses the old towels for work.

I buy the reversible comforter every 4-5 years. These things are light, but very warm. We use it as a spare blanket during winter, since we turn the heat way down at night. As safe as electric blankets are, I can't see myself using one. I won't get any sleep worrying about the blanket electrocuting me while I sleep...lol

The comforter sets for DS was too good to pass up. His room is red, white & blue. Actually more navy and white with touches of gray and red. He currently has a red/white/blue Izod comforter, but it's way too heavy for summer. Last summer he used the spare bedroom's lighter comforter in his room. When I found this one on sale, I couldn't resist. As you can see there were stackable Veteran's Day codes and Kohls cash, so I got this and another sherpa one for a song. I love this one. It's gray, blue and light green. We can just get rid of the few red touches when he uses this comforter.

I wasn't planning on getting the Christmas gifts at Kohls, but I figured it's a better deal with the discounts, rebate, ebates & Kohls cash, than any other store. Hence my high OOP.

Now for the crazy tale of the coffeemaker. About 2 years ago I scored a great deal on a Cuisinart Grind & Brew coffee machine at Macys. I got the machine & 2 other Cuisinart items for $60 oop after rebate. Not long after buying the coffee machine,  I accidentally knocked the glass coffee pot off the counter. I was bummed, because I loved this machine. I packed it up and put it in the basement and have used a French Press (DH's idea) ever since.

Last year I fell in love with the Ninja coffee system, but missed out on the sale. The same item was on sale again this year, but I just didn't have peace about buying it. You know that gut feeling you get when something doesn't feel right? Well, I trust mine because it's always right. Besides, the reviews were mixed and there were some really bad ones about it leaking and stop working. Then I decided to search for a replacement coffee pot (I was too cheap to pay $25 before, since the whole system cost double that amount) and found that Kohls has it. So after discounts, I got a good price. When it arrived, both DS and I were excited and I went downstairs to hunt for the machine. Except, there was no machine. We have a finished basement, so there's only a small area in which to look. This thing wasn't buried under loads of stuff. I went to the shop (where DH works) to search the storage area. Nothing. I know that I didn't get rid of it, because I figured I could still sell the system, since it was fairly new. Well darn, so much for my new coffee pot. So I opted for the cheap Hamilton Beach coffee maker, that's $7 after rebate. Hey, as long as it makes my coffee, I'm happy.

I've searched all big box stores for a deal on the Cuisinart, but it was $100 almost everywhere. Then I noticed that Meijer had a week long sale on it for $74.99, get $25 CAT. For BF week, they run different sales that overlap with the weekly ad. On Saturday they had jingle bucks. So I told DH to stop at the store on our way out, grabbed my coffee maker and paid $38.xx after all discounts. I'm a happy mama, because we now drink freshly ground bean coffee again. Yay!

Back to Kohls. I buy the Pyrex every year to use for food storage. I'm replacing all my plastic storage containers with glass. Last year I opted for the Corningware set, to add to an existing set I have. Don't ask about the toaster. Our toaster works fine. However, I've found that when I get the urge to buy something, it always turns out that we need it. Just ask DH....lol. Last year I bought him a Philips Norelco electric razor for Christmas (scored a great deal at Kohls). When he opened the gift, he asked me why I bought him something he already has. I told him that his other razor was old and this way he has a spare when the other one breaks. Not long afterwards, he accidentally dropped his old razor and guess who had a brand new one to use?...lol. No need to run around with a 5 o'clock shadow and no paying full price. And no, I'm not psychic....lol

So on to the money:

I combined stackable coupon codes and rolled some Kohls cash to purchase all my items. I did separate transactions to get the most out of my gcs.

I still have $75 Kohls Cash to use. We don't need a single thing. I'm going to see if I can find some clearance athletic shorts for DS. The rest will be used to buy clearance to resell, so I can recoup some of my OOP.

There's method to my madness. Always remember my mantra when you read about my weird shopping trips. I had a plan for Kohls. I wanted to... 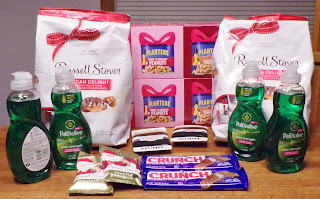