At the end of December 2016, two of my old couponing friends (that I've reconnected with) and I decided to use point earning sites to pay for all our 2017 Christmas gifts. We worked hard at earning gift cards on Swagbucks, Mypoints and Instagc. As in, we did this 7 days a week. We also earned gift cards from grocery apps like Ibotta, Savingstar and Checkout51. I'm happy to report that we did it!! My husband couldn't believe that we managed to do this.

We also sold our old items (clothes, shoes, accessories, you name it) online. I've been doing that for several years, but really went all out last year. Since we wear name brand clothing (that I purchase at deep discounts during end of season sales), we make good money when we resell the stuff we no longer use. In most cases I make more than what I originally paid for the item, because I usually buy it at 80-90% off.

How did we manage to get great gifts for our families? By shopping year round. We know that the best sales are at the end of the season and not during holiday shopping season. We purchased very few items during the holidays, only because of those items' release dates. The bulk of our shopping were done earlier in the year. Not only did our hard work pay for Christmas, but it also paid for my family's clothes/shoes. I shop ahead and stockpile clothes for upcoming seasons. This way I don't have to pay full price when we need something. I just shop from our spare closet.

Once our Christmas shopping was done, we started saving gift cards for this year's gifts. I need to go through all my earned gcs, to check the balances of everything and calculate the total I currently have. In the meantime, let's look at January's numbers

I've redeemed for 2 x $10 Starbucks gcs on Savingstar, which will be used as teacher's gifts

Part of this was because WHBM only allows one gc per order. I had 2 x $50 gcs, but was only allowed to use one. I didn't want to split my order, because I would've had to pay shipping twice. So I paid the balance out of pocket.

I had a few big ticket sales, which resulted in a nice fat profit for us. Not bad for selling our old stuff. Not so much old stuff. I like to keep up with trends, but it can get expensive. So I buy the clearanced items, then when I'm ready to get rid of it, I sell it. In most cases, the items are still in a great condition.

That my dear friends, is how we save for clothes and the holidays. I'm not gonna lie, it takes some work, but is totally rewarding.
at February 02, 2018

You all know it's rare for things to go smoothly at Wags. I woke up feeling really rotten yesterday - sniffles, scratchy throat & ... 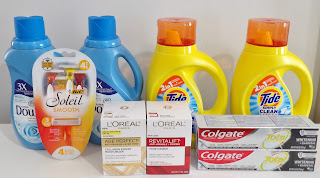